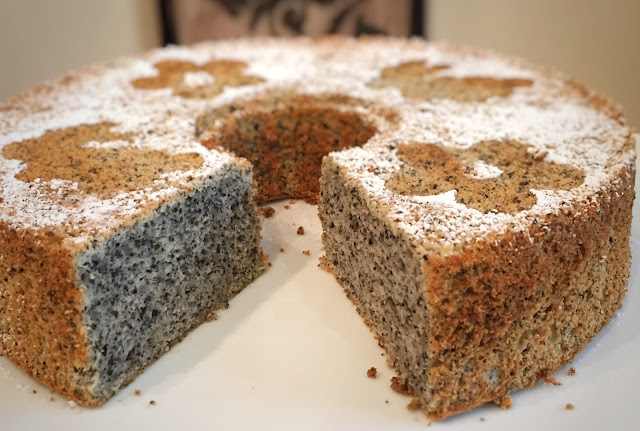 Been months since the last post...but o welps, better than no post right? (#^.^#)  I made this cake completely on a whim - just randomly thought to myself, "Hm, wonder if there's a good black sesame cake recipe out there?" and of course there was.  Yay Google Search.  This recipe comes from a Taiwanese food blogger from Australia going by Green Cilantro, though sadly, it seems she hasn't posted anything new in the last couple of years.  I pretty much followed it to the letter with an extra step, and listed more weight measurements.

For the most part I think the cake turned out great, except mine was no where near as tall as hers, despite using a pan that was about 9 1/2"- 10" in diameter like she had said in her post.  Perhaps I over-mixed it and deflated the egg whites too much when folding them in, but my batter just did not fill up my pan very much even before baking.  The finished cake was still plenty fluffy and light in texture though, so not sure what's up with that.  ヽ(￣д￣;)ノ At any rate, it was an after-the-fact trial run for my tot's birthday cake next month and I was pretty happy with the results, especially as it is not overly sweet.  Hopefully I will get better pictures of it next time with a proper camera and update this post later. （＾ｖ＾） 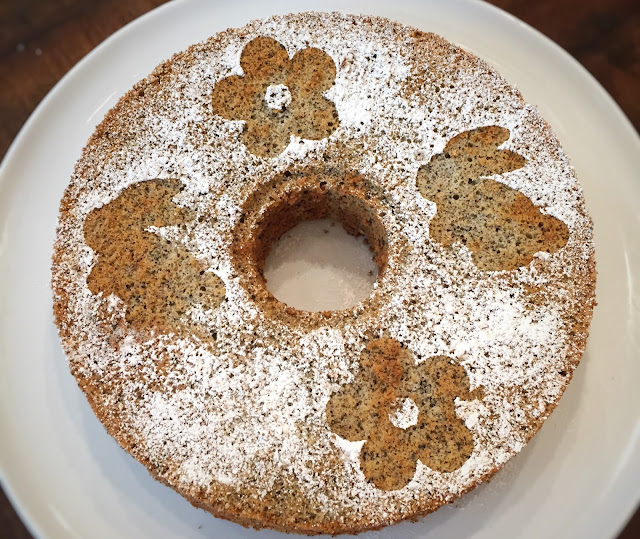 Optional step: combine 65g of the sugar and the black sesame powder in the food processor and process it for 30 seconds or so to make a finer mixture.

Preheat oven to 325 degrees and set rack in the middle.

Sift cake flour, black sesame powder, 65g of sugar, baking powder, and salt together in a large mixing bowl (I discarded some of the larger bits of sesame seeds that didn't go through the sifter).  Whisk to make sure everything is well combined and then make a well in the center.

Beat the egg yolks until they begin to lighten.  Slowly beat in the vegetable oil until the yolks are pale yellow and thicken slightly (almost like you are making mayo).  Add the yolk mixture into the well of the dry ingredients and mix gently.  Add the milk to the yolk/flour batter and combine thoroughly until smooth.

In a separate bowl, beat the egg whites until foamy.  Continue beating as you slowly add the remaining 60g of sugar, and beat until you reach the stiff peaks stage.

With a spatula, gently and slowly fold the egg whites, a third at a time, into the black sesame batter.  Pour the batter into the ungreased angel food cake pan and bake for 45 minutes, or until a tooth pick inserted comes out clean.

Invert the cake and let it cool completely (1 to 2 hours) before attempting to remove it from the pan.  Dust with powdered sugar or serve with a dollop of whipped cream. 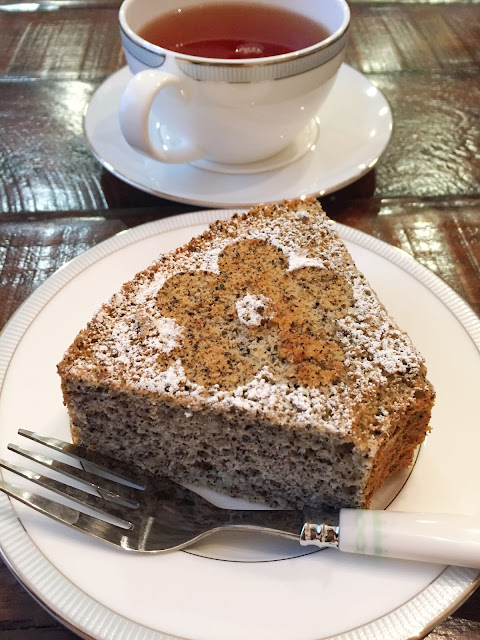