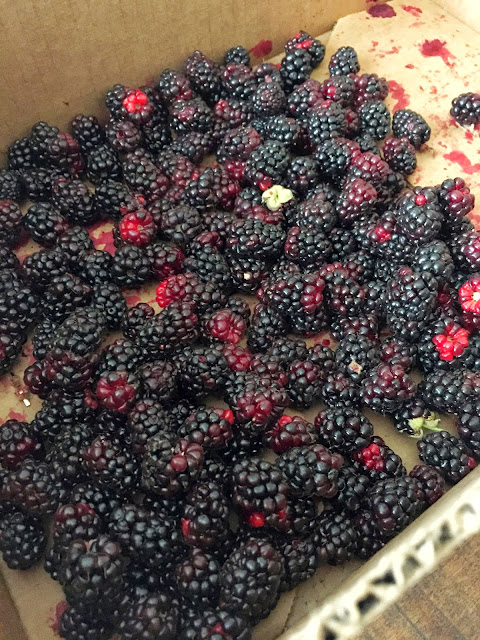 It's been a busy couple of months for us here - half of it spent recovering from various colds it seems.  Since cherry picking season opened up last weekend here, we thought we would head out for a fun day with friends picking fruit, letting our kiddos run around, and having a picnic.  The day started out with both Miss A and her buddy feeling a bit under the weather, a cloudy sky to match the mood, and chilly temperatures at a time of year that is normally blazing hot.

The day didn't seem to be getting any better when we finally arrived after driving over an hour to find that farm after farm was closed or at capacity for U-pick cherries.  Due to the California drought and general poor growing conditions, every farm's cherry crop was super light and picked clean after opening just for a couple days.  After driving around in circles for a good 40 minutes, we settled on two other farms to pick white peaches and blackberries instead. 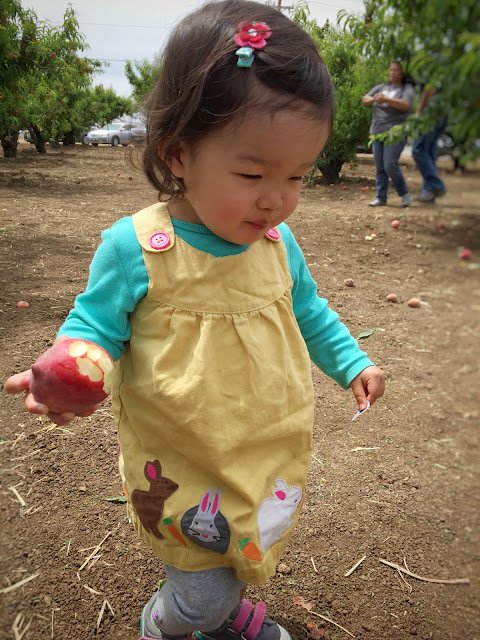 Both Miss A and her buddy finally got to wander about the fields and stuff their faces full of fruit, and the sun even came out as well so a good time was still had by all. :) 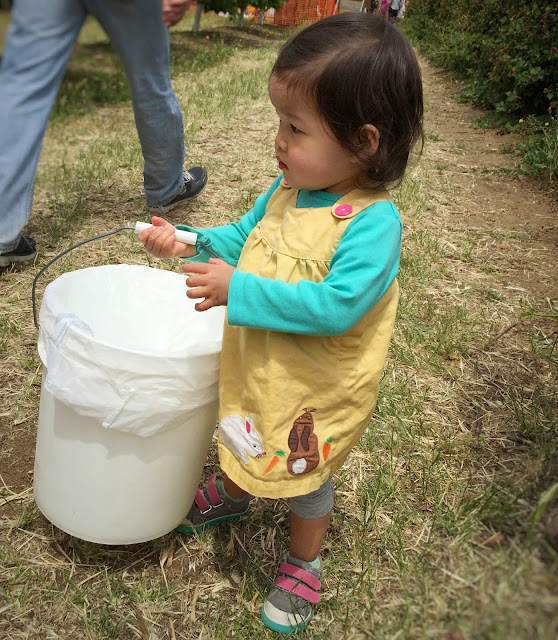 The girls even helped to pick some of the fruit - though most of it ended up either squashed in their hands or stuffed into their mouths.（⌒▽⌒）It's important to get them started early on earning their keep right? (^_−)☆ 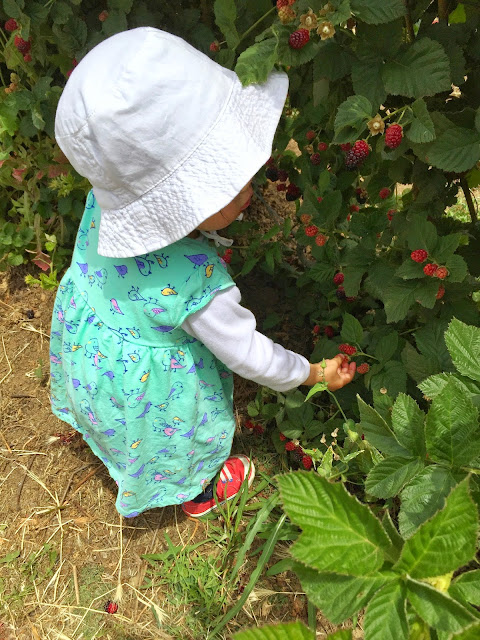 I knew I wanted to make a dessert with our fresh blackberries and settled on modifying this blueberry crumb bar recipe from Smitten Kitchen, but wanted a bit more crunch so I added some rolled oats and chopped honey roasted almonds to the crumb mixture on top.  The result was a crumbly, buttery bar with just the right amount of crunch and tangy sweet fruit.

Since toddler was fussy I didn't have much of a chance to take nice photos so everything was just quickly shot with my iPhone this time, but I promise it tastes good! (At least I think it does.  I don't even know anymore.  It's been a very long day with a crying, sick, and clingy toddler and this was one of the few things she was willing to eat, so that's saying something right?)  f(^_^;)

Pre-heat oven to 375 degrees Fahrenheit and grease a square 9x9 pan (or line it with parchment paper for easier cleanup).

Combine 115g of sugar with the baking powder, flour, salt, and lemon zest in a medium bowl.  Using a pastry cutter or fork, cut in the egg and butter until well blended and the dough resembles crumbly coarse sand.  Pat a little more than half of the mixture into the pan. 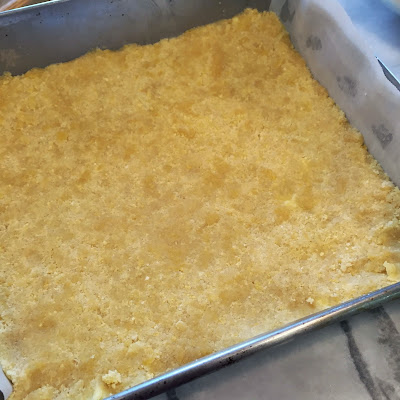 In a separate bowl, gently combine the blackberries with the remaining 60g of sugar, cornstarch, and lemon juice.  Depending on how tart your berries are, you may want to add more or less sugar to taste.  Spread the berry mixture evenly over the crust.  I had a few extra cherries lying around so I just threw them in with the blackberries as well. :) 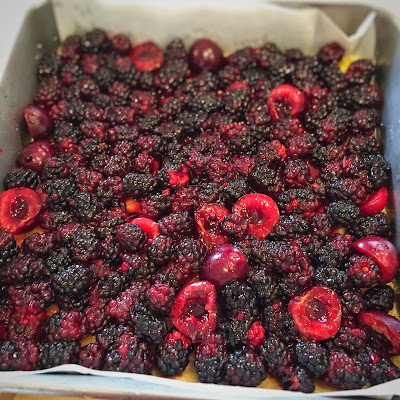 Mix the chopped honey roasted almonds and rolled oats with the remaining crumbly dough.  Pinch some of the mixture into small clumps and leave some of it in crumbles and spread the whole thing over the top. 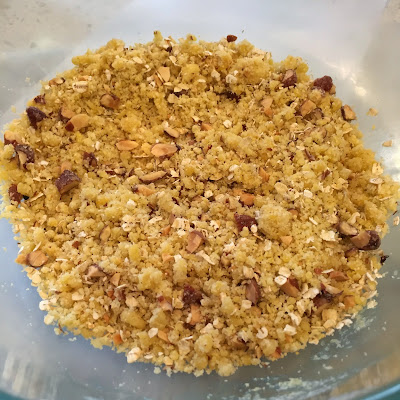 Bake in the oven for about 45-55 minutes until golden brown on top and berries are bubbling.  Cool completely before cutting into squares. 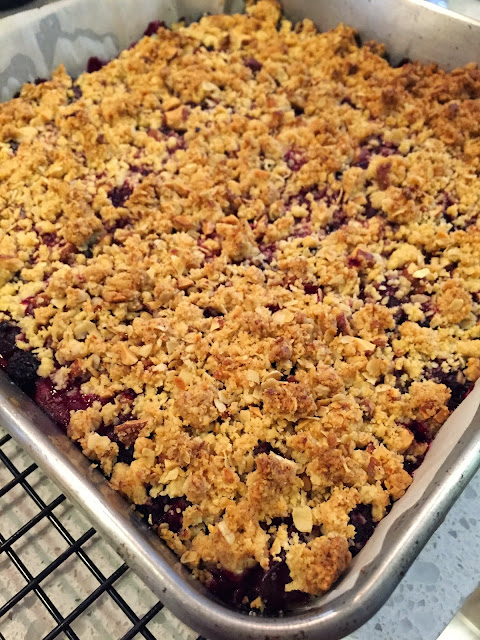 I like to eat it chilled with a dollop of whipped cream, or you can also warm a piece and serve it with a scoop of ice cream.  Goes great with a mug of hot tea or coffee in the morning! 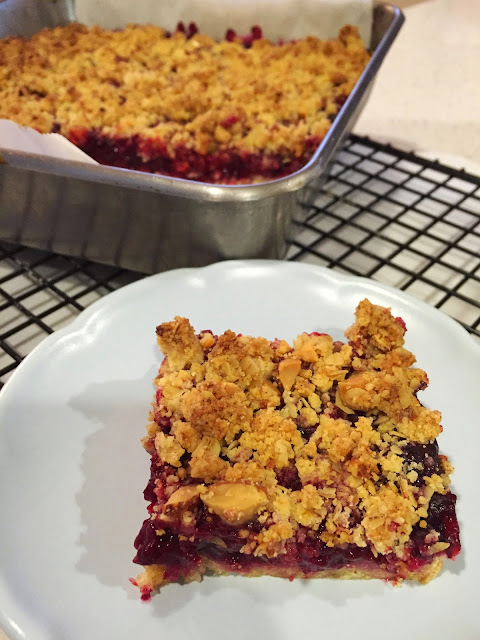