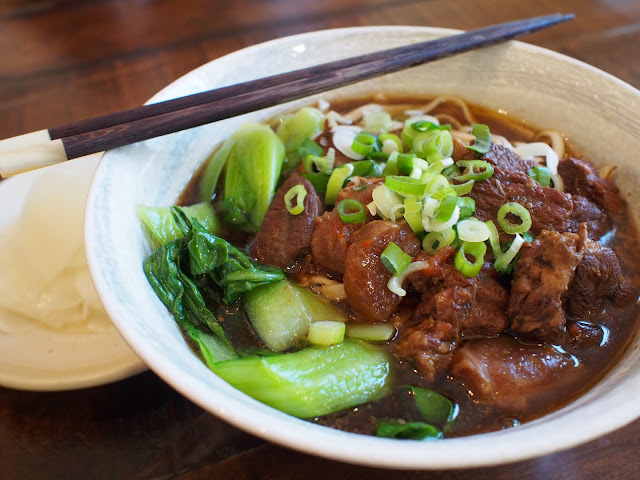 Finally getting around to putting up the recipe for beef noodle soup that I've fallen in love with! :D  Thanks so much to my mother-in-law for introducing this recipe to me and helping me make it the first time and translating the ingredient list!  I LOVE using my Instant pot for this and now I don't have to go out to eat one of my favorite comfort foods! It is awesome for making a large batch at once so that I can freeze into smaller servings later on for a quick meal.  It's also great for serving large groups of friends with out taking too much time away from guests on the night of the dinner since you can make most of it ahead of time. (^_^)v 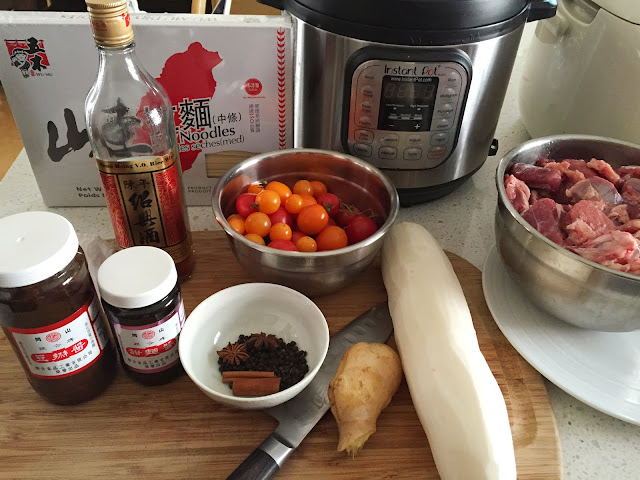 For serving:
- baby bok choy (usually 1/2 to 1 stalk per person if they are fairly large, if smaller I might use 2-3)
- Chinese wheat noodles - We usually use the Wu Mu (五木) brand of dry noodles in medium width
- chopped green scallions
- chopped cilantro (optional)
- 1 TB chicken bouillon + water for boiling noodles OR just use chicken broth)

*If you buy the beef shank from an Asian market, they usually come in a cut that's called banana beef shank as shown in the video linked below.  If you buy from an American market, they are usually bone-in and cut differently, but some butchers can de-bone it for you or cut it in the right shape if they have a large uncut piece in stock).

Before beginning, it is helpful to watch the YouTube video [unfortunately video seems to be no longer available] that this recipe is based on.  I made a few adjustments to ingredient amounts and added tomatoes in my version, but the steps are essentially the same as the video so it's helpful to see it live.

Chop daikon into large 2-3" chunks.  Cut ginger into 5-7 slices.  Roughly cut the beef shank into large 2-3" chunks, varying the angle of the cuts so you end up with different shapes and sizes for a more interesting "mouth feel." ^_^  Wash tendon and cut into 1-2" pieces.  Generally, you want to have the beef shank cut larger than the tendon as the tendon takes longer to soften, so by having smaller tendon chunks, that helps balance the cooking time between the two.

Heat 1TB of oil on high heat and once the oil is hot, stir fry the chopped pickled mustard greens for about 30 seconds until heated through and fragrant.  Remove and let cool.  Keep the burner on for next couple steps.

In the same wok, add 4 TB of oil and while the oil is still cold, add the star anise, cinnamon, and Sichuan peppercorns and stir fry until fragrant (about 30 seconds).  Remove spices and set aside to cool before putting into spice bag.

In the hot wok with the leftover oil from frying the spices, add the ginger and stir fry it for 30 seconds or until fragrant.  Add the beef shank and tendon to the wok and brown for about 3 minutes, stirring occasionally.

Add the tomatoes, sweet flour sauce, (spicy) bean sauce, and ketchup to the wok.  Use a spatula while stir frying to make sure all the meat is evenly coated with the sauces.  Cook for another few minutes before removing it to your pressure cooker's pot. 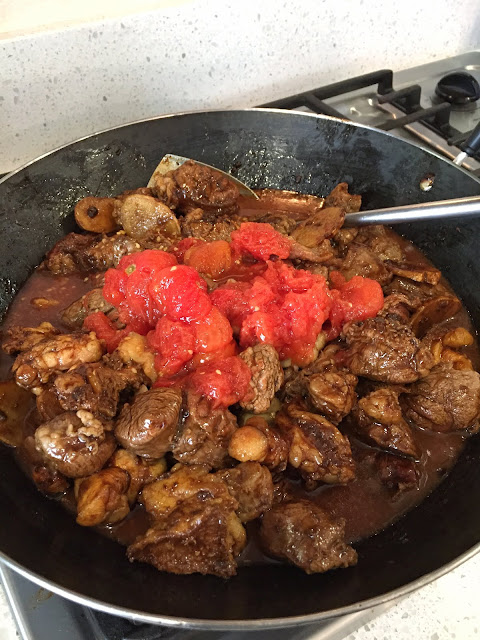 Pour the soy sauce over the meat in the pressure cooker, along with the Shaoxing wine if using.  Stick the spice bag into the middle of the meat pile so it doesn't float to the top.

Add enough water to just cover the meat (about 6.5 cups in the Instant Pot).  Add the daikon on top.  Make sure not to exceed the max line of your pot. 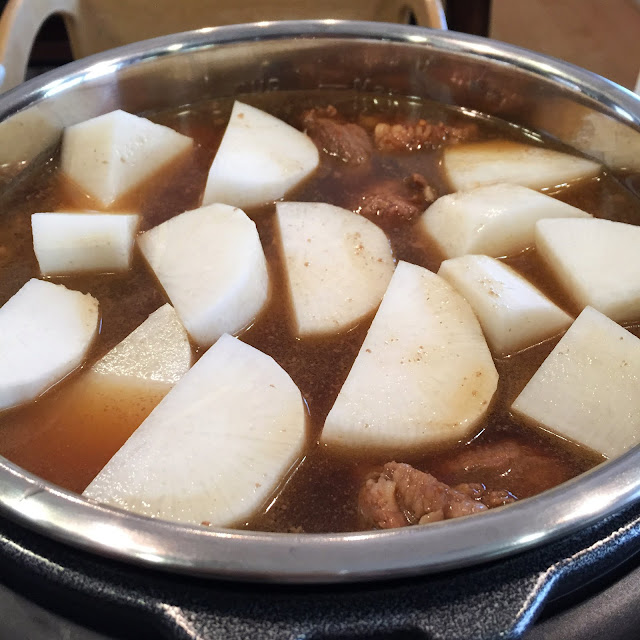 Seal your pressure cooker and cook for 25-35 minutes (Meat/Stew setting on Instant Pot), depending on how soft you like your meat.  While the meat is cooking, wash and prep the bok choy, green onions, and cilantro if using.  When the meat is almost done, start bringing a large pot of water to boil, and add the chicken bouillon to it. Once it is boiling, blanch the bok choy for about a minute, then remove and set aside.  When the meat is done, carefully release the steam and open the lid.  Discard the spice bag.  Cook noodles in remaining water according to package instructions. 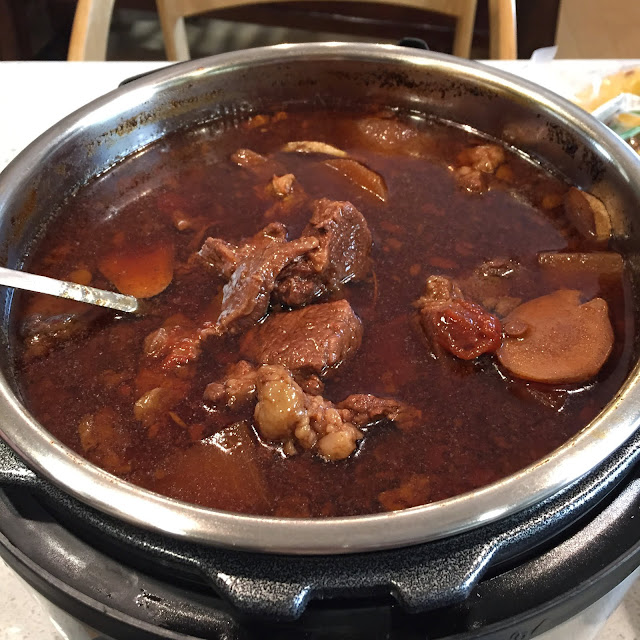 Divide noodles among large bowls and ladle in beef broth and noodle water into each bowl in a 1 to 2 ratio (or to your preference).  Add meat and bok choy, garnish with cilantro, green onions, and the pickled mustard greens (I don't serve the noodles with the daikon - you can discard or eat separately).

You can also scoop up the beef and daikon directly and serve it as a main dish with steamed rice (minus the broth, which is quite concentrated and salty by itself).

This recipe makes a huge batch of concentrated broth and stewed beef.  I like to divide up the remaining concentrated broth and meat into smaller batches once they have cooled and vacuum-seal it for the freezer so that I can have a quick meal ready on busy nights by just boiling noodles and blanching some veggies.  I also divide up the pickled mustard greens into smaller packages and freeze that too. 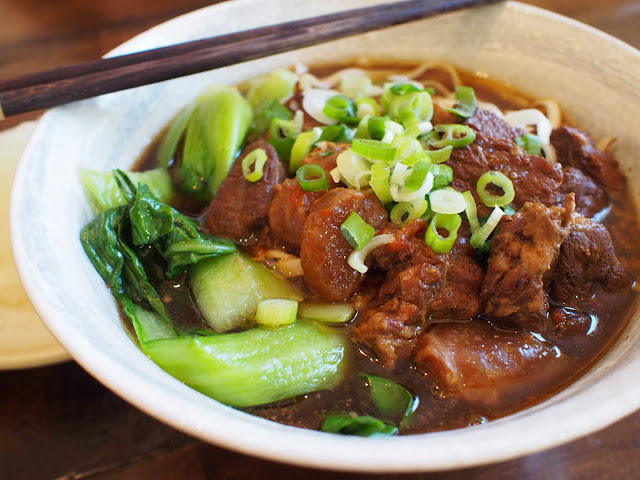